Long-running children’s television show Sesame Street is welcoming a new kid to the block – a Muppet with autism called Julia.

A redhead who loves to sing and remembers the words to lots of songs, Julia will debut on the show for preschoolers on April 10 after a five-year outreach effort to families and experts on autism, Sesame Workshop said on Monday.

“For years, families of children with autism have asked us to address the issue,” Dr. Jeanette Betancourt, senior vice president of U.S. social impact at the nonprofit Sesame Workshop, said in a statement.

One in 68 American children is currently diagnosed with autism, according to the Centers for Disease Control and Prevention, an increase of some 119 per cent since 2000.

Autism is a developmental disorder present from early childhood, characterized by difficulty in communicating and forming relationships with other people and in using language and abstract concepts Stacey Gordon, the puppeteer who will perform the role of Julia, and Christine Ferraro who wrote her part, both have family members who are on the autism spectrum.

“It’s important for kids without autism to see what autism can look like,” Gordon told the CBS show 60 Minutes in a preview on Sunday.

“Had my son’s friends been exposed to his behaviors through something that they had seen on TV before they experienced them in the classroom, they might not have been frightened. They might not have been worried when he cried. They would have known that he plays in a different way and that that’s okay,” she added.

The show will see Julia interact with favorite characters like Big Bird and Elmo but sometimes get overexcited, or flap her hands.

The character will be supported with books and videos in both Spanish and English on the sesamestreet.org website and costumed character visits to community events.

Since its launch in 1969, Sesame Street has tackled issues such as divorce, disability, race and death alongside its role in teaching very young children to read, count and learn colors.

Sesame Street is seen in either the United States on PBS and HBO, or local TV versions in more than 150 nations and has won multiple awards for its educational content and its message of inclusion. 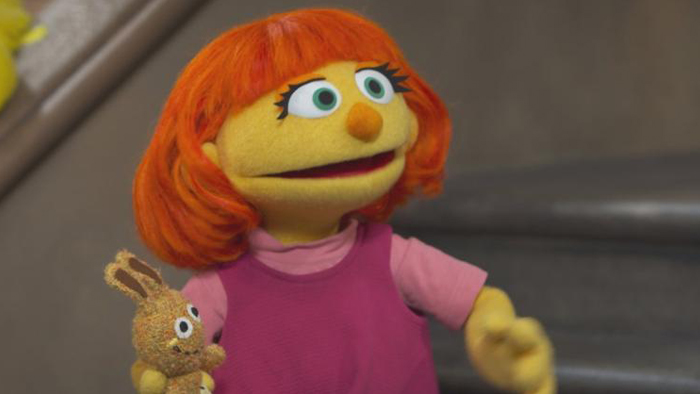