It says something about the place in the Canadian imagination occupied by Peter Mansbridge that everyday Canadians know his dual origin stories: How he got his start in broadcasting and the drama behind him landing the big chair at The National.

In September, 1968, as lore has it, Mansbridge was working as a ticket agent for the regional carrier Transair at the Churchill, Man., airport when an announcement he made over the intercom caught the attention of a Canadian Broadcasting Corporation station manager, who complimented his voice and offered him a contract job as a late-night DJ at CHFC-AM. Within a year, Mansbridge had launched a brief newscast on the station, which led to other radio and then TV work with CBC. He became a parliamentary correspondent in 1976.

A little more than a decade later, Mansbridge was the anchor of Sunday Report when CBS came calling with a high-priced offer for him to co-host its revamped morning show. He turned them down after a late-night visit by CBC brass, including Knowlton Nash, the full-time host of The National, who offered to make way for his younger colleague. Mansbridge’s “departure would have meant a weakening of Canadian journalism,” Nash told The Globe and Mail at the time, in terms that may seem excessive in 2017, “and my own personal agenda had to take second place.”

When Mansbridge signs off from his final broadcast on Canada Day, it will mark not just the end of his role as chief correspondent for CBC News, but also the capstone of an era of TV news. With 29 years behind the desk, he is the longest-serving current anchor of a network newscast in North America. (Jim Lehrer left PBS in 2011 after 36 years, and Lloyd Robertson stepped down from CTV National News in 2011 after 35 years.)

CBC intends to invest heavily in developing a relationship between the audience and the new National anchors. (There will be multiple ones, though the network has not yet settled on precisely how many.) But it seems inconceivable that Canadians will know or care as much about whoever replaces him.

The shape of Mansbridge’s career roughly traces the trajectory of the TV news anchor: its once-central role, and its now sharply diminished importance in the current chaotic media landscape, characterized by an almost infinite number of outlets. ( The National’s ratings reflect that competition: This season, the show averaged 866,000 viewers a night, across both the main CBC network [525,000] and CBC News Network [341,000]. CTV National News, meanwhile, pulled in about 1.1-million; Global National, a suppertime broadcast, has averaged 789,000 since January.)

“He’s a Canadian icon,” noted Jennifer McGuire, the general manager and editor-in-chief of CBC News. “For a lot of us, we experienced this country and history through his guidance. He’s been the front door to our understanding of our country and our world.” She added: “I think there’s a relationship there, and that is something that happens in broadcast in a very real way. They feel they have a relationship with Peter.”

With that in mind, Mansbridge, who announced in September that Canada’s 150th birthday celebration would mark his exit from the mainstage, is in the midst of a long goodbye. He visited five cities for a National In Conversation series of public forums. On Wednesday, Anna Maria Tremonti interviewed him during the first segment of The Current. Next Wednesday, he will helm his final broadcast of The National from Toronto. Thursday’s show will feature a tribute to his career. He will be interviewed Friday morning on CBC News Network’s Morning Live, to promote his final broadcast of The National that evening from Ottawa. On Saturday, he will helm five hours of coverage from Parliament Hill.

But while most Canadians know him for his on-air work, colleagues spoke this week about his roles behind the scenes as a mentor and advocate. (Mansbridge himself turned down The Globe’s request for an interview.)

In the early 1990s, Mark Kelley was working for CBC in Quebec City when he received a job offer from CTV. “CBC wanted to retain me, so their idea was to bring me to Toronto, where for the first time I was introduced to Mansbridge,” Kelley said. “They knew, to a young journalist, the power of Peter.” Mansbridge told Kelley, who is now with The Fifth Estate and an occasional anchor of The National, “why he thought it was important for me to stay with the public broadcaster, how my career would benefit in the long run and the good work the CBC does.”

Kelley says that, since then, he has made it a habit to have lunch with Mansbridge every year. “Peter has incredible insight on what goes on inside the CBC and even outside the CBC,” he said. “He knows where all the bodies are buried.”

In the summer of 2015, when host Evan Solomon was fired from News Network’sPower & Politics over conflict-of-interest allegations, the broadcaster put Rosemary Barton in for a trial run.

“Peter was immediately very supportive of me, and a big advocate for me in the building in Toronto,” Barton said. “He made sure there was space for me during the election on The National, to provide analysis. He understood the importance of a woman hosting that show.” (CBC made Barton the permanent host in January, 2016.) “Even as recently as three weeks ago, at the Conservative convention, he was the reason I was sitting next to him [on the broadcast]. He makes those decisions about who he trusts to have beside him in moments like that, and he just did that time and again.”

When Adrienne Arsenault was tapped to host her first National broadcast a couple of years ago, she asked Mansbridge if she could observe him in the studio as part of her preparation. “He said, ‘Of course you can watch me. You can stand beside me.’ It’s a pretty classy thing to do,” she said.

Over the years, as Arsenault had progressed from production assistant on the program to foreign correspondent, Mansbridge had urged her to find her own voice. “When you’re starting, you really need to feel somebody has your back if you’re going to try to be you, because you don’t always know how that’s going to go over.”

Mansbridge’s voice is characterized by what Kelley calls “a steely calm,” especially in breaking-news situations such as Sept. 11, 2001, and the Parliament Hill shooting in 2014.

Tom Clark, the long-time CTV broadcaster who was a friendly rival of Mansbridge’s over the decades, noted the challenge of that sort of coverage: “When you’re sitting there in the studio and stuff is breaking – you’ve got producers talking in your ear, you’ve got floor mangers handing you notes, you’ve got this chaos swirling all around you – it’s easy to let the events carry you, instead of you carrying events,” he said. “And if you’ve got one job as an anchor, it is to recognize the importance of – or the unimportance of – things. And Peter was always extraordinarily good at that.”

“TV is in many regards about showing up,” Clark added. “For the length of time he’s been doing it, inevitably you become part of the fabric of the culture. The fact of the matter is, now he’s part of the cloth.” 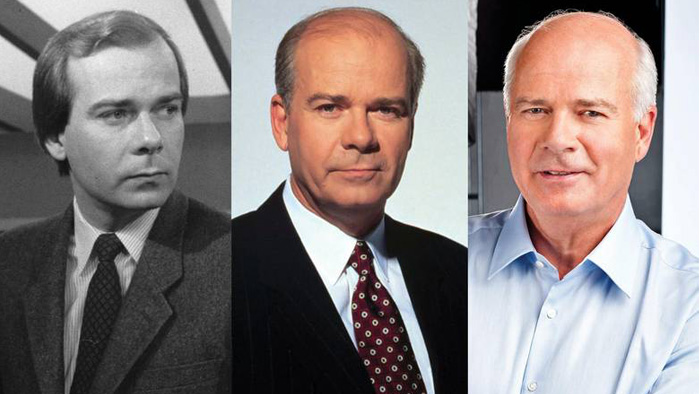