She begins to describe the scenario: a handful of guys rushed into the lobby of NOW’s former digs at 189 Church, saying they’re in a band and needed to speak with the editor at NOW about being on the cover. One of them ran over to a piano in the lounge area behind the reception desk and started hammering out tunes, while our receptionist, Amy, sat helpless.

When Carla mentions that a couple of them were filming the scene, it suddenly sounds familiar.

“Did they say they were called Nirvanna the Band?” I ask, as it all starts falling into place. I’m realizing that in the process of chasing a story about a new homegrown TV show in production, set to premiere on VICELAND on February 2, I’ve inadvertently nudged my colleagues and I into the semi-fictitious world of Nirvanna The Band The Show.

Based on a web series by long-time friends Matt Johnson (Operation Avalanche, The Dirties) and musician/composer Jay McCarrol, the show follows Matt and Jay, two idiot roommates who will try any crazy scheme to book a show at the Rivoli – everything except for rehearsing and just… booking a show.

Their band is called Nirvanna the Band, and no, they’ve never heard of Kurt Cobain. The show’s charm is rooted in the characters’ naïveté, thrust upon the citizens of Toronto, who become characters in improvised scenes, with elements of Tom Green and Nathan Fielder thrown into the mix.

The web show, which wrapped up in 2009, is one of the funniest Toronto series I’ve ever seen. So when my brother, who played in a band called the Golden Dogs with McCarrol a few years back, tipped me off that something new could be in the works, I wanted the story.

I called the number they’d replaced their webisodes with on their website. Soon, I had more than I’d bargained for: we became part of their storyline. NOW Magazine features prominently in the second episode of the new series. More scenes were shot at our old office (now torn down to make way for a condo) with our former art director, Troy Beyer, who worked with us for 27 years. Our current art director, Michelle Wong, patiently tolerated Johnson, disguised as a cable guy, pretending to “test” her phone.

But you don’t have to appear in the show to experience a connection to it. The Rivoli and the surrounding area at Queen and Spadina, Honest Ed’s, the Santa Claus Parade, Scotiabank Theatre – they all play themselves in the series in a way that has never been done so lovingly before.

Instead, we’ve had a top-notch local industry that masks landmarks and proper names to support the illusion that we are another city, or any generic city – anything but Toronto.

“For the first few episodes of our web show, we were setting it in an anonymous city,” McCarrol says.

I’m sitting on the set of the show, a rented house in West Queen West. The walls are covered in Criterion Collection movie posters, like a film-obsessed teenager’s bedroom. There’s a piano in the living room, a white board for planning schemes and bunk beds nearby.

“One day we were shooting and the CN Tower was reflected in the shot, and we’re just like, ‘Oh, the CN Tower’s in there,’” he continues. “And then we all kinda looked at each other – remember this?”

“I do, it was outside the Rivoli,” Johnson chimes in, suddenly sounding a lot like his character in the show. He has a habit of talking over McCarrol, who is more subdued. Just like their characters in the show.

“It was outside the Rivoli,” McCarrol continues, “and we kind of all made this decision in a very happy, like high-five way. ‘Yeah! We’re in Toronto! This is in Toronto. Of course.’”

It’s not a small thing. Seeing your own city, a city that’s not very good at touting or preserving its own rich history, being celebrated on television just feels damn good. And seeing people in your own city producing a cool TV show – a good one, with a strong point of view that takes risks – is encouraging to anyone dreaming of showbiz, too.

Shows like Kim’s Convenience and Workin’ Moms have done the same. The Regent Park neighbourhood (although shot in Moss Park and in studios) features prominently in the former, and the luxe upper-middle-class Victorian homes in pockets like Riverdale aren’t blurred to look generic in the latter.

Johnson attributes this progress to two things: globalism means audiences are more open to foreign storytelling. And non-Torontonians are more familiar with us via Drake and the indie music scene, sports teams like the Raptors and the Jays. And, yes, Rob Ford’s infamy helped, too.

“I don’t think Toronto’s ever been featured in a TV show like this before,” says executive producer Matt Miller by phone later on. “We’re going to stay here, we love it here, we’re going to raise our families here. It’s the greatest city in the world, and we want people to see that. When I watch a show like Portlandia, for example, I feel like I understand Portland – at least through a certain lens.”

That lens is, without question, white and male. As the team gears up for its pranks – trying to sneak past the police into the Santa Claus parade with an attention-grabbing float that the Rivoli might notice, or completely ruining the premiere of Star Wars Episode 1 for fans at Scotiabank Theatre – you wonder if different kinds of people could get away with the same stunts.

But unlike set-ups of the same ilk, the people they ambush never look stupid – even if it can be uncomfortable to be filmed. Instead, the joke is that Matt and Jay are so creative, so filled with energy, so determined to make their dreams come true, but lack common sense. They’re like teenagers pretending to be adults, modelling their behaviour on characters they’ve seen in popular culture.

Johnson and McCarrol began developing their characters in high school. McCarrol was the “music guy” at Erindale in Mississauga, with ambitions to score movies one day. And everyone at nearby John Fraser knew Johnson as the “movie guy.” Johnson’s girlfriend, who went to Erindale, introduced them at Silvercity.

They instantly became friends, sharing a penchant for performing and being the class clown. When McCarrol’s parents went out, Johnson would secretly go over to his place and spitball ideas.

“We knew we wanted to create something and we kept coming up with ideas,” McCarrol explains. “Every day it seemed like we’d be on to something, but then we’d move on. Which is very much like what we do as our characters.”

After high school, McCarrol went to Berklee College of Music in Boston but left after three years, eager to get started on a career. Johnson graduated with a film degree from York, but he resented filmmaking rules about scripts, fake sets, lights and shooting in public.

They moved into an apartment together at 402 Queen West, just west of Spadina, hoping that living together downtown would fuel the production of a movie. It worked.

McCarrol and Johnson’s brainstorming at the piano evolved into the show’s premise. Matt and Jay would want to book a show at the nearby Rivoli. There would be no scripts, lights or professional actors. They’d use any music they wanted without permission and wouldn’t change the names of anything.

They put the episodes up on a website for their friends. Gradually they grew a cult following and earned a bit of media coverage and invitations from networks to create something new based on Matt and Jay’s characters. But television execs are risk-averse, opting for shows shot on built sets with scripts and lights. The boys turned them down.

“All that anybody wants to see, in our opinion, when they look at anything – any media really – is some human reality,” Johnson says. “And if you’re missing that, it doesn’t matter how good all this other stuff is. It sucks.”

You will find that spirit in the two films Johnson made after the web series, The Dirties and Operation Avalanche (named a finalist for best Canadian feature by the Toronto Film Critics Association). He utilizes a lot of the same improvisational strategies to create scenes that feel real and conversational, with characters who sometimes speak directly to the audience, both calling attention to the artifice and making it even more real in the process.

He became well-versed in the legal issues pertaining to fair use and shooting in public: the crew famously snuck into NASA to shoot a scene for Operation Avalanche. So when VICE came knocking, asking Johnson to produce their first scripted series for VICELAND, he was prepared: Matt and Jay were back.

McCarrol and Johnson say they couldn’t make the show for any other Canadian network.

“We don’t have an executive community in this country that is risk-taking or getting fired when they fuck up, and that is a huge issue when you’re trying to develop a talent base,” Johnson says.

He’s known for being outspoken: last year, one of our most popular online film stories covered his critical take on the Canadian movie industry.

“While I agree we have an amazing comedy scene and a lot of extremely funny people, we don’t have a place for those people to make content. It’s not possible – you’d need to leave.

“And I think more than anything – funny how this gets us back to Toronto –that is something that Jay and I and all of us feel so strongly about: not leaving Toronto, not leaving Canada.” 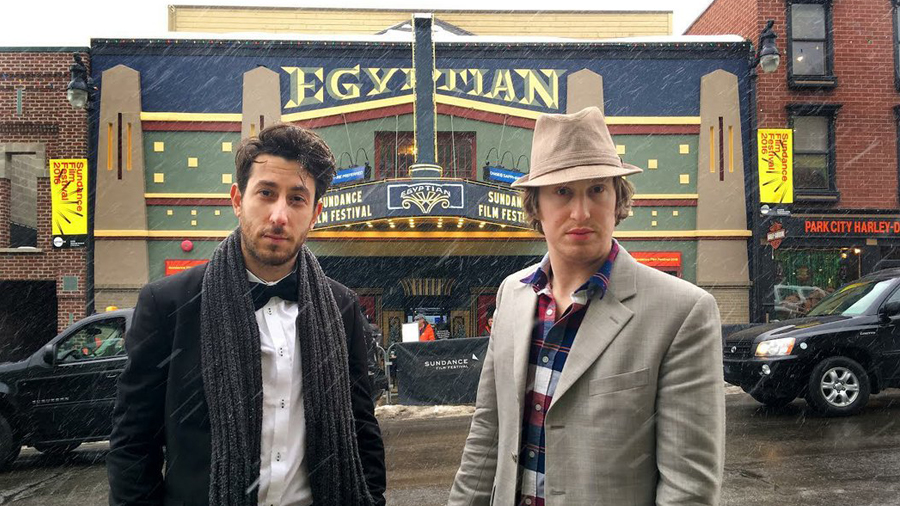