Having trouble with planning your TIFF’17 schedule? There are oodles of docs to choose from with goodies ranging between the incomparable Agnès Varda (Faces Places), a screening that includes a free intimate concert with Lady Gaga (Gaga: Five Foot Two), or a winner winner chicken dinner with Morgan Spurlock (Super Size Me 2: Holy Chicken). But don’t forget to add a little Canadian content while playing TIFFR Tetris. (We recommend thisunofficial app as the essential tool for TIFF planning.)

Now that we’ve waded through the line-up and had a chance to see some of the films, here’s a quick rundown on Canadian documentary culture at the festival. We’ll have reviews and interviews for Canadian and international docs at the festival, so stay tuned for when ourTIFF Docs Hub goes live next week!

Doc fans from the 6ix will wanna score some court side seats for this b-ball film about the Raptors’ all-around giant Vince Carter. This doc by Sean Menard (Fight Moms) profiles the legacy of the eight-time NBA All-Star and features interviews with Steve Nash, Director X, Mona Harlem, and Drake, who served as executive producer. Last year’s basketball doc Giants of Africa was a highlight on the Canadian front, so avoid the double dribble on Single Ticket Day, especially since Carter, Harlem, Director X and Wheels will all be in attendance.

Docs that get the red carpet treatment at Roy Thomson Hall are rare, so one has to appreciate what a major event this doc is from Jennifer Baichwal and Nick de Pencier (Watermark). The Tragically Hip’s farewell tour and final concert in 2016 will go down as a defining moment in Canadian culture as audiences and viewers around the nation tuned in to see frontman Gord Downie go out on his own terms following a diagnosis of terminal brain cancer. While Downie is understandably absent from the festival’s initial guest list, Hip members Rob Baker, Paul Langlois, Gord Sinclair, and Johnny Fay are all slated to attend in person, while the the frontman will certainly be there in spirit for one of TIFF’s most emotional nights. This Canadian film blogger and Hip fan’s already nabbed a bottle of Ahead by a Century chardonnay to toast the band and filmmakers in spirit. Santé!

The Masters: Alan and Alanis

There is a House Here
Dir. Alan Zweig | TIFF Docs

Toronto’s favourite curmudgeon Alan Zweig continues his impressive hot streak. After winning Best Canadian Feature at TIFF for When Jews Were Funny and the festival’s inaugural Platform prize for Hurt, Zweig outdoes himself with the challenging and surprisingThere is a House Here. Few subjects could seem as difficult to tackle as troubled hero Steve Fonyo, whom Zweig followed in Hurt and its follow-up Hope, yet the director uses his easygoing and approachable gift for gab to tackle his trickiest subject yet: life in the Canadian north. There is a House Here depicts the north in all its complexity as Zweig visits the Inuit to remedy his ignorance and ask with an open ear how allies may help to improve life for the Inuit. Central to the film is Zweig’s “semi-reluctant guide” Lucie Idlout, who might just be the strongest and most fascinating character in any film at the festival this year.

Our People Will Be Healed
Dir. Alanis Obomsawin | Masters

Few filmmakers worldwide have as strong a legacy as Obomsawin does since she’s literally chronicled the struggles of Indigenous persons both past and present with a rich body of work that often doubles as a document of record. The high point of her career might be Kanehsatake: 270 Years of Resistance in which she most fully mastered her signature cocktail of passion and rage while chronicling the Oka crisis, but her recent quintet of films about the rights of Indigenous children will be equally relevant for years to come. Last year’s We Can’t Make the Same Mistake Twice draws eerie parallels between a contemporary court case and the legacy of Canada’s residential schools, while Obomsawin’s new film traces the roots of the story back to Norway House where a forward-looking model for decolonization lives alongside this traumatic chapter of history. After charting the history of her people, Obomsawin looks to close the wounds with this hopeful film.

Quebec’s droll docu-drama-mentarian Denis Côté solidifies his status as one of the nation’s most oddball auteurs with his new film A Skin So Soft. This peculiar companion piece to arthouse hit Bestiaire does for bodybuilders what the latter film does for caged beasts at a zoo. A Skin So Soft offers Côté‘s dryly humorous observational style as he introduces six bodybuilders who flex their muscles and undergo rigorously vain procedures to beautify their bodies. The film seamlessly blurs the lines between fiction and non-fiction as the director playfully uses style and meaning to immerse the audience in an unexpected deconstruction of masculinity. The film artfully and humorously asks us to consider the measure of a man with its surprising portraits of these burly men. Stay tuned for a feature onA Skin So Soft in the Fall issue of POV!

I’m often skeptical of films in which the director also takes on the role of subject, but Matt Embry’s Living Proof shows that the two-birds-one-stone formula can have great success. Embry, director of Theo Fleury: Playing with Fire, shows his strength and vulnerability by putting his own experience with multiple sclerosis before the camera. The doc invites audiences to join him on a fact-finding mission about the alternative remedies, like proper dieting, that help a person with MS live a healthier life instead of buying into the prescriptions of Big Pharma that don’t prove effective in the short or long terms. The film is an incendiary call to action, but it’s also an emotionally engaging and compelling story of one family’s quest to give a son a long and healthy life. Stay tuned for an interview with director Matt Embry! (And keep moderation in mind whilst hitting up the TIFF parties.)

Doc fans lining up for Alanis Obomsawin’s Our People Will Be Healed need to grab a ticket to Short Cuts Program 5. The programme features the latest short doc from Michelle Latimer, who most recently had success with the VICE series RISE after directing the featuring documentary Alias and shorts like Choke and The Underground. Nuuca brings together Latimer’s activist sensibility with the evocative aesthetics of her fictional works as she draws an evocative link between the destruction of the land by oil rigs and the traumas ravaged upon women by the men who tend the fields. Nuuca features Oscar winner Laura Poitras (Citizenfour) as executive producer, if one needs more incentive to seal the deal.

Canuck Anjali Nayar (Gun Runners) directs this co-pro with Kenyan-German actor/filmmaker Hawa Essuman that looks especially promising for doc fans with an interest in human portraits. The central character of this film is Liberian activist Silas Siakor, who’s devoted years towards anti-logging campaigns and establishing the Sustainable Development Institute to advocate for protecting the country’s resources. Silas receives a double dose of spotlights as part of the TIFF speaker series and invites Teresa Kramarz, Director of Munk One, a program for first year undergraduate students at the Munk School of Global Affairs at the University of Toronto, to participate in an engaging conversation, and as part of the Our Digital Future series to reflect how Siakor’s use of technology and social media to further activist causes harnesses the digital revolution to enact change.

TIFF might have just announced a FREE screening of Dunkirk with Christopher Nolan in attendance at the Ontario Cinesphere, so if anyone’s super excited to see an IMAX movie that’s already in theatres, then that’s just fine. (It is an excellent film.) But long beforeDunkirk turned the Twittersphere into a roaring debate over the superiority of 70mm, IMAX, 4D cinema and surround sound, Graeme Ferguson defined “see it as it was meant to be seen” cinema with North of Superior. Picked by POV as one of Canada’s documentary essentials, this pioneering film made a doozy of a splash for IMAX and proved that documentary could be just as grand a cinematic adventure as Lawrence of Arabia. And if you really want to experience North of Superior as it was meant to be seen, catch it at the festival complete with live Indigenous music and powwow performances.

Everyone always raves about Peter Mettler’s Picture of Light, also one of POV’s documentary essentials, for its truly gorgeous lensing of the northern lights. And rightfully so since Mettler essentially films the unfilmable to capture one of Canada’s natural wonders. But the real gem of the film is a laugh out loud funny sequence in which a lodger up north uses his trusty rifle to shoot a hole in the wall, let the light in, and show Mettler how much snow can accumulate overnight. It’s a wacky and eccentric scene that one can only describe as “Herzoggian.”Picture of Light, both breathtaking and bizarre, is a wonder of Canada’s national art form.

One perk of focusing on a stream of this mammoth festival is the benefit of seeing the fluidity of styles and genres. A highlight of any festival is the discovery of a film that challenges conceptions of documentary and non-fiction filmmaking, like Deepa Mehta’s riveting Anatomy of Violence did at last year’s festival by chilling us to the bone and interrogating the social conditions that breed rape culture. This year’s Canadian front yields the provocative hybrid film Luk’Luk’I (pronounced Luck Lucky). Pitched as “falling somewhere between a fiction we need to see and a documentary we wish didn’t exist,” this ingenious film is like Canuck Kiarostami as Wapeemukwa expands upon his award-winning short of the same name and invites a handful of Vancouverites to play iterations of themselves in a drama set against the backdrop of the 2010 Winter Olympics. The film challenges perceptions of Canada as we perceive it and Canada as it really is. The inability to distinguish between the two is often unsettling. Check back soon for an interview with director Wayne Wapeemukwa!

We know that Alanis Obomsawin is a master behind the camera, but how well does she take direction? The documentary legend offers a rare dramatic turn in this short film from Caroline Monnet (Mobilize). Obomsawin is one of six Indigenous women partaking in this feast commissioned by Montreal’s Festival du Nouveau Cinema, if doc fans want a little dessert to end the meal. Bon appétit, TIFF-goers! 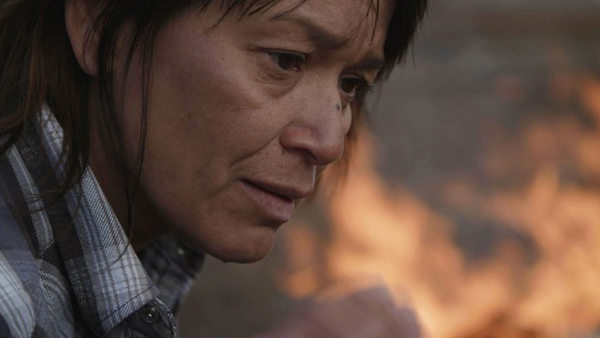